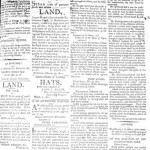 S. Judson STARK, who is a descendant of the MARCYs and HARDINGs, of pioneer stock, is looking up old records preparatory to writing up his family history. The record goes back to 1772-75, the time when all this section was held under the Connecticut survey. Mr. STARK came into possession, a few days since, through Hiram MARCY, of Nicholson township, of the old compass, drafting tools and other instruements (sic) used by Zebulon MARCY in laying out the township of Putnam, embracing what is now Tunkhannock township and a portion of Lemon, Washington and Eaton. The compass was made for one of William PENN’s surveyors, William POYNTELLE by name, under whom MARCY learned surveying. Mr. STARK also has an old iron tobacco box carried by MARCY, and which saved his life when fired upon by a British Tory, just before the Wyoming massacre. The British were massing Tories up in New York state preparatory to making a raid down this way, and sweeping the valley. MARCY and one or two other men were sent up this way to scout around and watch for the invaders. While stopping at Slocum spring, on the site of the present Tunkhannock tannery, they were espied by Adam WORKMAN, a Tory living a short distance away. WORKMAN’s wife told Adam to shoot, and he did so, the bullet and a slug which the weapon contained, striking the tobacco box and glancing harmlessly off. MARCY returned the fire, mortally wounding WORKMAN. These and other incidents of revolutionary days, recalled by those old relics, go to make up an intensely interesting page in local history.