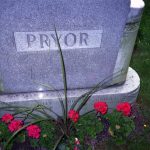 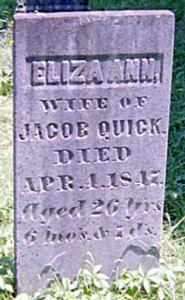 Paula and Ron Radwanski have bravely taken on the daunting task of photographing all gravestones in Wyoming County, and they are a good way toward accomplishing their goal! The inscriptions from the photographed stones are being used to update and add to the society’s cemetery inscription database, started back in 1975 by the following members: Jean Brewer, Hazelle and Foster Brooks, Dolores Radwanski, Katherine Kiethline, Dorothy and Lew Cavalier, Rodney Ball, and Paula. These photos may also be the only lasting records of stones that will eventually deteriorate or be completely grown over.

The project began while the couple was taking GPS readings to create the Wyoming County Cemetery Map. Slogging up hills and through the brush and overgrown weeds to some of the out-of-the-way grave sites, they thought it was a shame that many people would never see the stones, so they began to take photographs. Things took off from there.

The photos available so far can be viewed at the society on the new computer, and will eventually be offered to patrons for a small fee.