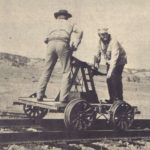 Serious Collision on the Montrose Railroad Near Tunkhannock In Which Several Men Are Injured.

Special to the Scranton Tribune.

Tunkhannock, April 21 [1895].—A serious, and perhaps, fatal accident occurred on the Montrose railroad today. A special train, conveying General Passenger Agent Asa P. BLAKSLEE and another railway official to inspect the Meshoppen creek bridge, near Avery station, left here about noon. Less than a mile from this place the train met a gang of five section men coming down the mountain grade at lightning speed on a hand car. A curve in the track prevented either party from seeing the danger until they nearly met. The engineer reversed and the men on the hand car made a wild endeavor to apply the brakes, but seeing that a collision was inevitable, some of them jumped. When the crash was over a hastly (sic) examination revealed the fact that all the men but one were more or less injured, and some of them severly. (sic)

Al. SMITH had a leg broken near the hip joint, and was taken to the Sayre hospital. Henry DYMOND had two or three ribs broken, and Wellie FULLER was also quite seriously cut and bruised. The others were more fortunate, and escaped with slight wounds.

The Montrose road has been remarkably free from accident in all the years of its operation. It was constructed in 1872, and has never had a fatal accident, with one exception, and that was wholly the fault of the victim. He was intoxicated and fell from a moving train and broke his neck.