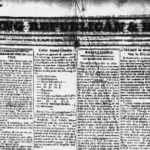 Today Wyoming County has one local newspaper, the New Age Examiner [Update: Wyoming County Press Examiner in 2016]. Going through the old newspapers from the Metcalf collection (purchased and returned from NY State in 1981) we find the following papers were at one time published in our county.

Wyoming Patrol and Republican Standard – 14 Jun 1843 thru 14 Feb 1849, published by William Bolton. In the 8 Apr 1849 issue, it states S. S. Winchester has bought the establishment of Wm. Bolton and changed the name of the paper to “Wyoming Co. Democrat”.

Tunkhannock Republican – Col. Perry Marcy began publication of the paper on 1 Aug 1869, mainly to advocate the cause of Temperance, education and Republican principals. Editor was Albert F. Yost. Mr. Yost had come to Tunkhannock circa 1866 to start a newspaper in the office of the defunct “Wyoming Republican.” In 1873, Yost and Judson Furman leased the “Tunkhannock Republican” from Col. Marcy and ran it until Furman left in fall of 1875. Col. Marcy took over the paper again with Miss S. E. Bower as editor. In 1876 he sold out to Cyrus D. Camp and he later sold it to George Lyman Brothers “New Age” in Feb 1904.

New Age – The “New Age” began publication in 1882, however, little is known about those first years. In 1886 it was bought by Victor Lyman and George Young. In 1887 Berkley Lyman bought out Young and Lyman Bros. was born. In 1876 Berkley and Ellen Atkinson were married and in 1881 brother Victor married Ellen’s sister, Lucinda. The Lymans worked together to keep the paper going. In 1892 Frank Hefferan, aged 16, came to work for the “New Age.” He worked without vacations for 65 years, even hating to take holidays off. He was killed while crossing the street in Tunkhannock on 26 Apr 1957, aged 82 years. Lucinda Lyman died in 1902 and the other three Lymans carried on and expanded the business. In Feb 1904 they purchased the “Tunkhannock Republican” from Geo. Baldwin and on the 18th of that month the first “Tunkhannock Republican and New Age” came off the press.

Tunkhannock Republican and New Age – The three Lymans continued at the paper until the death of Berkley on 14 Sep 1931. Brother Victor, and Berkley’s widow, Ellen, were left at the helm. Victor died 20 Aug 1935 leaving his sister-in-law Ellen alone at the paper. The editorial reins were immediately taken up by niece Lucinda Luce (adopted daughter of Berkley Lyman) and her husband, Cecil K. Krewson. Cecil Jr. began working at the paper while still a student at THS. In 1946 the other Krewson son, Lyman, came to work at the paper. Eventually the daughter-in-laws and even grandchildren took on jobs with the paper, making it a real family affair. On 26 Dec 1947 Ellen Lyman died aged 100 years and 3 months. Summer of 1966 the Krewson family started publication of a second paper, the “Trail Examiner,” in Nicholson. They operated the two papers until Nov 1977 when Cecil Jr. sold them to the “Scranton Times.” The last “Trail Examiner” was published 4 Jan 1979 when the papers were incorporated into “The New Age Examiner.”

Nicholson Examiner – a weekly paper published by S. L. Tiffany from ca. 1871 to 1877, when the “Nicholson Item” was founded by E. L. Day; it was removed to Tunkhannock and the name was changed to the “Tunkhannock Standard.”

Laceyville Messenger – first linotype in county used here by Jan 1937 the machine was being used in “Tunkhannock Republican” office.

Nicholson Record – published was Moses Shields Jr., and after the fire in 1904 that destroyed the Examiner office.

Noxen Vandette – this newspaper was short-lived.